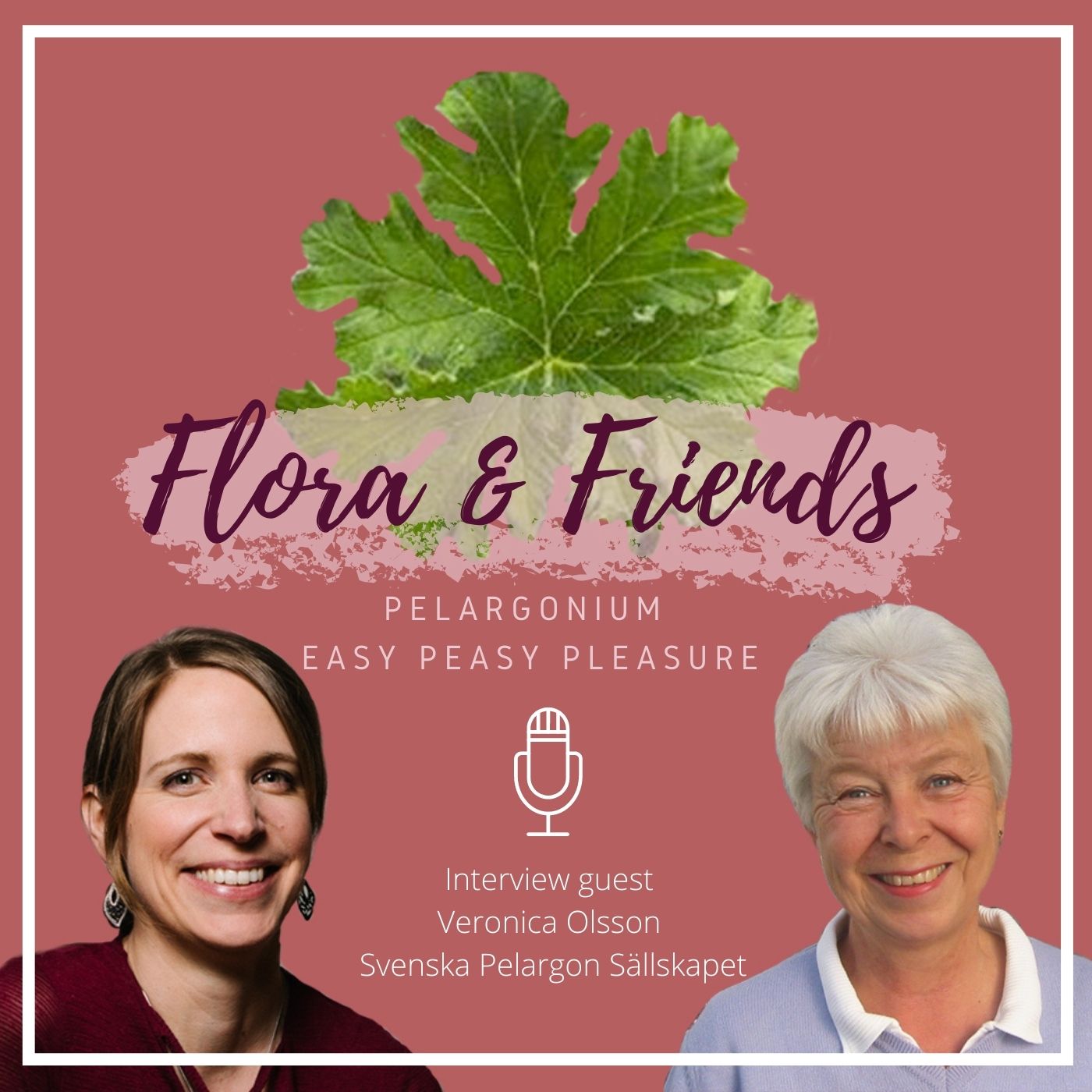 Contents hide
1 What to expect from this episode
2 How did your love for pelargoniums begin, Veronica?
3 What do you need to do to take care of all your pelargoniums?
4 Do you breed pelargoniums yourself?
5 What is so special about the English pelargonium?
6 “If you give them a little love, they will give you flowers”
6.1 How did Pelargoniums arrive to Sweden all the way from South Africa?
6.2 How have Pelargoniums then gotten so popular in Sweden, especially the Mårbacka Pelargonium?
6.3 How can one distinguish a Mårbacka pelargon from other pelargoniums?
6.4 Can one use Pelargoniums for something else than decoration?
7 “Pelargoniums are easy and pleasant”
7.1 Which places would you suggest if people want to have a look at some more unusual pelargonium varieties?
7.2 Thank you for the interview, Veronica!
8 Time to celebrate!

What to expect from this episode

Judith discusses historical facts and practical tips about Pelargoniums with Veronica Olsson, chairwomen of the Swedish Pelargonium Society and collector of more than 400 pelargoniums in her house and garden.

Listen to the interview in Swedish or read the English translation below. At the end of this page we have a little surprise for you!

How did your love for pelargoniums begin, Veronica?

It started with my mothers-in-law. My first mother-in-law gave me already in the early sixties a pelargonium that she had brought with her from her parents’ home and it was Dr. Westerlund, a fragrant pelargonium that is today Uppland’s province pelargonium. It has a long history that goes back to Dr. Westerlund in Enköping who thought that you should have it in the sick room because it gave off such a wonderful scent. That plant I still have even though I have then taken cuttings and new shoots have formed, but it is the original plant since the early sixties. From my second mother-in-law I inherited a number of other pelargoniums and then, it happened. I could not help but continue, so that’s where it started.

Today I have somewhere between 450 and 500 different ones. About 120 are pure species and the others are hybrids. Some have been refined many times, others are so-called primary hybrids which are the cross between 2 pure species, and they often have a little exciting flowers. I collect them because I like to have some special, a little different varieties.

What do you need to do to take care of all your pelargoniums?

If we start at this time of the year, I have a lot of cuttings. I prepare cuttings usually in August-September, from the pelargoniums that may be at risk for being lost during the winter. So I actually have a lot of cuttings at this time of year, maybe not of all varieties but of many. It’s like a life insurance. I have 2/3 of my plants in a frost-free greenhouse in the garden that I keep  between 5 and 15 degrees, a bit depending on the outside temperature. I water them during winter times every 4th to 5th day. They like it rather dry, the biggest risk for losing them is if one overwaters them. Then I have a lot of pelargoniums in all windows at home. I have one room with benches where I have a lot of pelargonium zonales and they bloom almost all winter. I keep that room well pretty cold, around 15 degrees.

Also, there are a lot of the pure species where it is better to take seeds, where it is simply not possible to take cuttings, for example for species with root tubers. They usually produce quite lots of seeds and they self-fertilize if you keep them away from others. I usually sow the seeds in October November, so I have something to do during the winter months. There are many ways for sowing pelargonium seeds. I usually soak the seeds in warm water for a couple of days and put them rather shallow in a porous sowing soil. I keep them warm until they germinate and then move them to a cooler place with extra light, where they usually continue to grow on their own.

As soon as it becomes frost-free in the spring, my pelargoniums can move out of greenhouse and home into the garden, so then I have most things outdoors in the garden on shelves and stairs. I have a fairly small garden and the flower beds are full of other plants so the pelargoniums need to be where it fits. 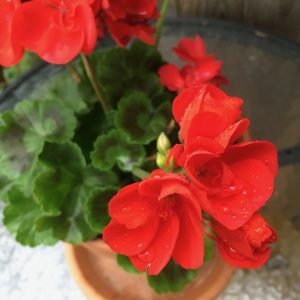 Do you breed pelargoniums yourself?

I do not do any breeding. I think there are so many people who do it and there are so many early hybrid pelargoniums actually that you can get hold of that are very beautiful hybrids. I think you could cross two plants that you want to use for breeding. Whether they are compatible depends on the number of chromosomes, they need to be equal. Then you should of course let the new seeds germinate and become a plant, see that it blooms nicely and then you should make cuttings in 3 generations before you can say that it is fairly stable to be able to sell them. You must imagine that it takes maybe up to 5 years. In the eighteenth century and early nineteenth century many English and unique pelargonium hybrids were bred. The oldest unique pelargonium is from the nineteenth century and it is still in cultivation.

What is so special about the English pelargonium?

“If you give them a little love, they will give you flowers”

How did Pelargoniums arrive to Sweden all the way from South Africa?

The first pelargoniums came to Sweden in the sixteenth century to Olof Rudbeck’s academy garden in Uppsala. They had a heated orangery where they would also keep citrus plants and other plants that can not stand the cold outdoors. That was probably where they started to replicate them, as they got them as tubers that you could transport  during the 3 months it took by boat from South Africa to Europe. If you buy this types of pelargoniums from nurseries in Europe today, you often get them very dry and they are just root stems that you plant and start watering. Then leaves will sprout eventually from them. Quite a fascinating process.

But at that time, normal people didn’t have plants in their houses and only the rich people with large properties and orangeries could afford having such plants. Their collections could be a status symbol.

How have Pelargoniums then gotten so popular in Sweden, especially the Mårbacka Pelargonium?

About the story of Mårbacka rather little is known. There were some pelargoniums from a French breeder, Victor Lemoine, that came to Sweden in the early twentieth century after the First World War. They spread across the country. The Swedish writer Selma Lagerlöf, who grew up at a place called Mårbacka, got this pelargonium probably during a visit to Gotland. When she eventually bought back Mårbacka, that wasn’t owned by her family during that period, she took the plant there. Other people associate this pelargonium rather with the Swedish artist Carl and Karin Larsson, living at Sundborn. And there is also a pelargonium that is called Sundborn pelargonium, but how similar this and the Mårbacka one are on a genetic level, we actually don’t know.

How can one distinguish a Mårbacka pelargon from other pelargoniums?

It is probable that just Mårbacka pelargoniums have existed in many different varieties in Sweden and it is probable that they date back to the pelargoniums  that came to Sweden in the beginning of the 20th century. They were often tall and slender and flowered on the tops. Today we want chubby plants that are good to send on trucks around the world rather than long and slender ones. If I go into the shops and compare them to the old Mårbacka varieties, there is a certain difference both in colour and how the flower looks. But I think that most people won’t see the difference and they also want a slightly more chubby plant rather than one that is a meter high.

Can one use Pelargoniums for something else than decoration?

Pelargoniums can be used in cooking and they can have quite different tastes. There is one species with a coconut taste that we don’t recommend to eat as it can lead to miscarriage in pregnant women. But otherwise, pelargoniums are edible. Whereas the Mårbacka isn’t really any good in terms of taste, the Dr. Westerlund fragrant pelargonium is nice to use in cake or cut in small pieces on icing on cake. It’s taste is from citrus-like to bitter. There are four different clones of fragrant pelargonium and they all have somewhat a different taste.

“Pelargoniums are easy and pleasant”

Which places would you suggest if people want to have a look at some more unusual pelargonium varieties?

There are some plant nurseries that have “pelargonium museeums”, but in the end none of them has a complete collection of all of them. Even expositions are rather rare. There is a GenBank collection of hybrid pelargoniums at Julita with hybrids that have a history in Sweden. This can be visited during summer months. Also the botanical garden in Uppsala has a pelargonium collection but this is usually not publicly accessible. For more places however, such as nurseries, you are welcome to visit the list on our website. On the Pelargonium Society’s website there is also a large collection of images available to members. During March 25th to April 4th 2021 lots of usually just internal information will be shared also to the public during the Nordic Garden’s fair (online).

Thank you for the interview, Veronica!

If you now got curious and want to grow some pelargoniums at home, you can find a variety of seeds shared for a small price by the members of the Pelargonium Society through their website. The members of the society are also visiting different plant shops and nurseries to share their knowledge. Find all information on their website.

We celebrate the launch of our Pelargonium podcast series with a pattern from a thin slice through a Pelargonium flower stem in a range of joyful colours. Follow us on our Instagram or Facebook pages to learn more how this pattern has been created and which cells it is based on!

We have also released one colour version of this pattern in our Society6 print on demand shop. Get your cup, notebook, cushion etc. with pelargonium prints to match the pelargonium on your windowsill.

The mystery of the flickering nasturtium

Continue Shopping Go To The Cart
Buy for 1,000.00 kr more and get free shipping